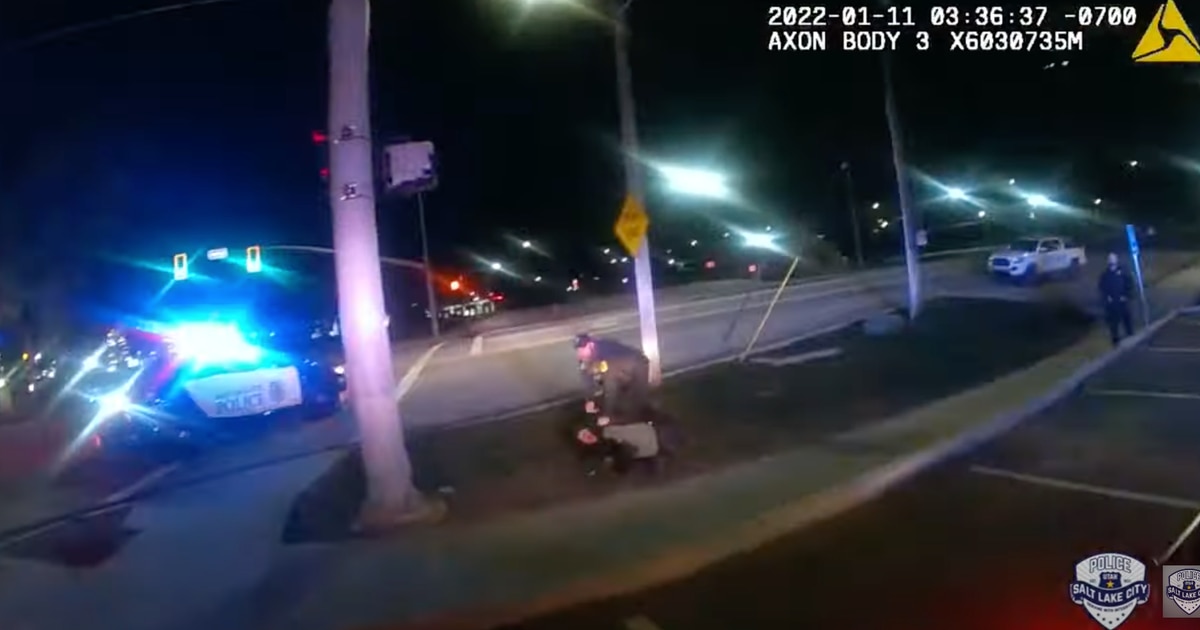 Newly released body camera footage shows a woman screaming for help as Salt Lake City police detain her during an arrest in January – a restraint that Utah medical examiners later determined contributed to his death, which was ruled a homicide.

“Help! They’re going to kill me! Help me!” Megan Joyce Mohn, 40, screams in the video, released Thursday. Later, he can be heard saying, “Please don’t shoot!” and “Don’t kill me!” I do not want to die !

According to a Salt Lake City Police news release, officers at 3:13 a.m. on January 11 received a report of a woman “circling in circles carrying a piece of rebar” at the intersection of 400 west and 900 north. Police said the woman, later identified as Mohn, attempted to enter a secure area of ​​the Marathon Petroleum refinery before returning to the intersection.

An off-duty Salt Lake City officer who had a second job at the refinery had ordered Mohn to drop the rebar, and the woman complied, according to the news release.

But when ordered to sit on the ground, she “continued to shout incoherent language”, resisted arrest and attempted to flee, the statement said. It was then that the off-duty officer took her into custody and called for reinforcements.

The sequence of the altercation begins when a second officer arrives on the scene around 3:36 a.m. The woman cries out for help as she kneels on the ground, and an officer repeatedly asks her name, saying, ” You’re going to jail if you don’t even tell us your name,” the footage shows. The woman replied that she “will probably go to jail anyway”.

She then asks the officers to call the police, stating that she wants to hear someone confirm that they are police officers. An officer responds that it’s the police, which is when Mohn shouts “Help!” They are going to kill me! Help me!”

Footage shows Mohn trying to get up. Officers then bring her back to a kneeling position.

“I don’t want to die, please,” the woman said. The officers ask her for ID and she tells them that her ID was stolen. An officer asks her name again, but the woman doesn’t answer, breathing heavily.

She then asks the water officers.

“If you tell me your name, maybe,” replies an officer.

“Oh, that’s just exploitation,” the woman says in the footage.

“Well, you want water, I want your name,” the officer can be heard saying in the footage.

The woman then asks if the officers can call more police and starts screaming for help again.

“I sound like all those stupid people on TV, don’t I?” she told the officers.

“You look pretty ridiculous,” an officer replies in the footage.

The police then decide to cut the woman’s backpack from her body, and she starts screaming for help again, telling the officers, “You have to stop. Approximately three minutes after the second officer arrived at the scene, officers moved the woman onto her back.

She starts kicking them, as seen in the footage. It was then that an officer held her face down while another held her legs.

“Say no to drugs, you would have fewer problems,” an officer says in the footage.

“First of all, alcohol is a super drug,” replies the woman.

“That’s it, look where you are,” the officer replies with a laugh.

An officer continues to hold Mohn face down for more than four minutes as another officer bends her legs behind her in a hogtie position to keep her from kicking. The woman sometimes cries indistinctly for about three minutes, then falls silent. After the officers have their legs chained, one of them holds his leg up – which hangs limply.

Officers then place her in a “recovery position,” on her side, according to the press release, at the end of the footage. At that time, the statement said officers attempted a “sternum rub” and administered a dose of naloxone – a drug that reverses opioid overdoses.

Police then found methamphetamine and spices among his belongings, according to the press release.

The woman remained unresponsive, so her restraints were removed and officers performed CPR, police said. She was taken by ambulance to the hospital. According to the police, the medical staff told them that the woman’s condition was not life-threatening and they left.

Mohn died in hospital on January 30 – 19 days after the altercation – and police learned of her death on February 9. officials announced in July.

According to police, the Salt Lake County District Attorney’s Office advised them to wait for an autopsy report and not to treat the death as a “critical incident involving an officer.”

Six months after the altercation, the Utah Medical Examiner’s Office ruled the woman’s death a homicide, saying she died of ‘anoxic brain damage’ due to ‘cardiac arrest’ due to “probable methamphetamine intoxication in connection with an altercation involving physical restraint.”

Chief Medical Examiner Dr. Erik Christensen said in an email on Friday that the office aims to complete 90% of autopsy reports within 60 days of their review, which is usually the day – or the day after – of death. Determining a final cause of death also requires a review of “investigative information obtained,” such as police records, videos, interviews with involved parties and other records, he said. .

“Assessing this information is a complex undertaking that requires time and attention,” Christensen wrote. “The more complex the case, the longer the investigation potentially takes. Our completion standard is a recognition that not all cases can be completed within two months and that the investigation will require more than the usual amount of work and follow-up.

Dr. Alon Steinberg, director of cardiology at Community Memorial Hospital in Ventura, Calif., has studied prone restraint use and cardiac death. In cases where people are placed face down and restrained — as Mohn was — Steinberg said there is a potential restriction of ventilation and circulation, which can be fatal.

“When you have cardiac arrest — which means the heart isn’t pumping any blood flow to the whole body — but the most vulnerable area is the brain,” Steinberg said. “So if the brain doesn’t get oxygen for four or five minutes, it could be quite catastrophic.”

“It looks like there was an extended period where she didn’t have enough circulation to her brain,” Steinberg continued, “and she suffered from brain death, and she may have suffered from other issues.”

Salt Lake City Police Chief Mike Brown said in a statement that the four officers involved “acted appropriately, quickly and professionally to save” the woman’s life during her arrest. All four officers are on paid leave as the woman’s death is still under investigation, police said.

“It is, unfortunately, a common occurrence,” Steinberg said of those restrictions. “We need to educate people in the audience that it’s dangerous.”