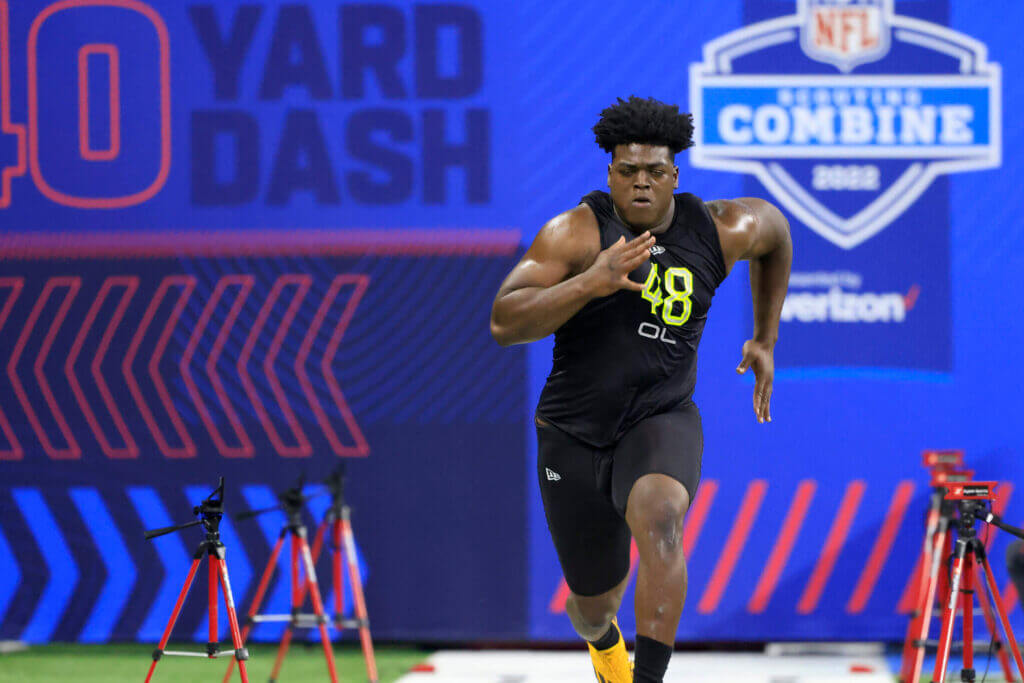 After the first round of the NFL Draft on Thursday night, Cowboys owner Jerry Jones said Dallas had its first-round pick, Tulsa offensive lineman Tyler Smith, ranked ahead of offensive guards Zion Johnson and Kenyon Green. Some in the Star’s press conference room were skeptical. After all, Green and Johnson were off the board by the No. 17 pick. Dallas drafted Smith at No. 24.

But Jones wanted to prove he wasn’t lying, so he took before him a sheet of paper he said had been printed three days before the draft. It appeared to show all of the team’s first-round ratings and the top of their second-round ratings.

“Can you see her?” Jones asked reporters.

To prove to reporters that the Cowboys had Tyler Smith ranked higher on their roster than Kenyon Green and Zion Johnson, Jerry Jones showed a copy of the team’s drafting board.

Stephen Jones: “Don’t show them that. … Put down this sheet. pic.twitter.com/vvj2NV4aEr

Jones put it down before anyone sitting nearby could take a photo with a cellphone. But several TV cameras in the back of the room were rolling, leading to this screenshot which was tweeted by WFAA reporter Mike Leslie on Tuesday.

Lol not for lack of trying…I legitimately came home and filmed our video of my laptop presser on my TV…that was all I had pic.twitter.com/rjVG093qAT

By improving the photo and breaking down the player names and school names, we were able to find what we think are the top 34 out of 39 names on this sheet. The last five were just too hard to decipher.

Stephen Jones said before the draft the Cowboys had 14-16 first-round ratings. After the first round, it was revealed that they had 14, which matches the 14 names listed in the top box. Judging by this enhanced photo, those 14 would be:

1. Kayvon Thibodeaux, DE, Oregon: Drafted No. 5 by the Giants.

3. Aidan Hutchinson, DE, Michigan: Drafted No. 2 by the Lions.

5. Ahmad Gardner, CB, Cincinnati: Drafted No. 4 by the Jets.

12. Charles Cross, OT, Mississippi State: Drafted No. 9 by the Seahawks.

The second round notes on the front of the diary seem to go as follows:

If this list is correct, the only players missing from the page who were drafted in the first round were Northern Iowa offensive tackle Trevor Penning, who went to No. 19 to the Saints, Pittsburgh quarterback Kenny Pickett, who went to No. 20 at the Steelers and Chattanooga offensive guard Cole Strange, who went to 29th at the Patriots.

“The good news is most of those players are gone,” Stephen Jones added after Jerry Jones filed the log.

Of the 34 listed above, Breece Hall, Gordon, Ojabo, Ebiketie and Logan Hall were still available when the second round began on Friday night. According to our list, Smith was the second highest ranked player remaining behind Cine. That Dallas chose Smith over Cine shouldn’t come as a surprise given how much value the Cowboys have placed on safety in the draft over the past 20 years. Roy Williams, in 2002, is the last safety Dallas drafted in the first or second round.