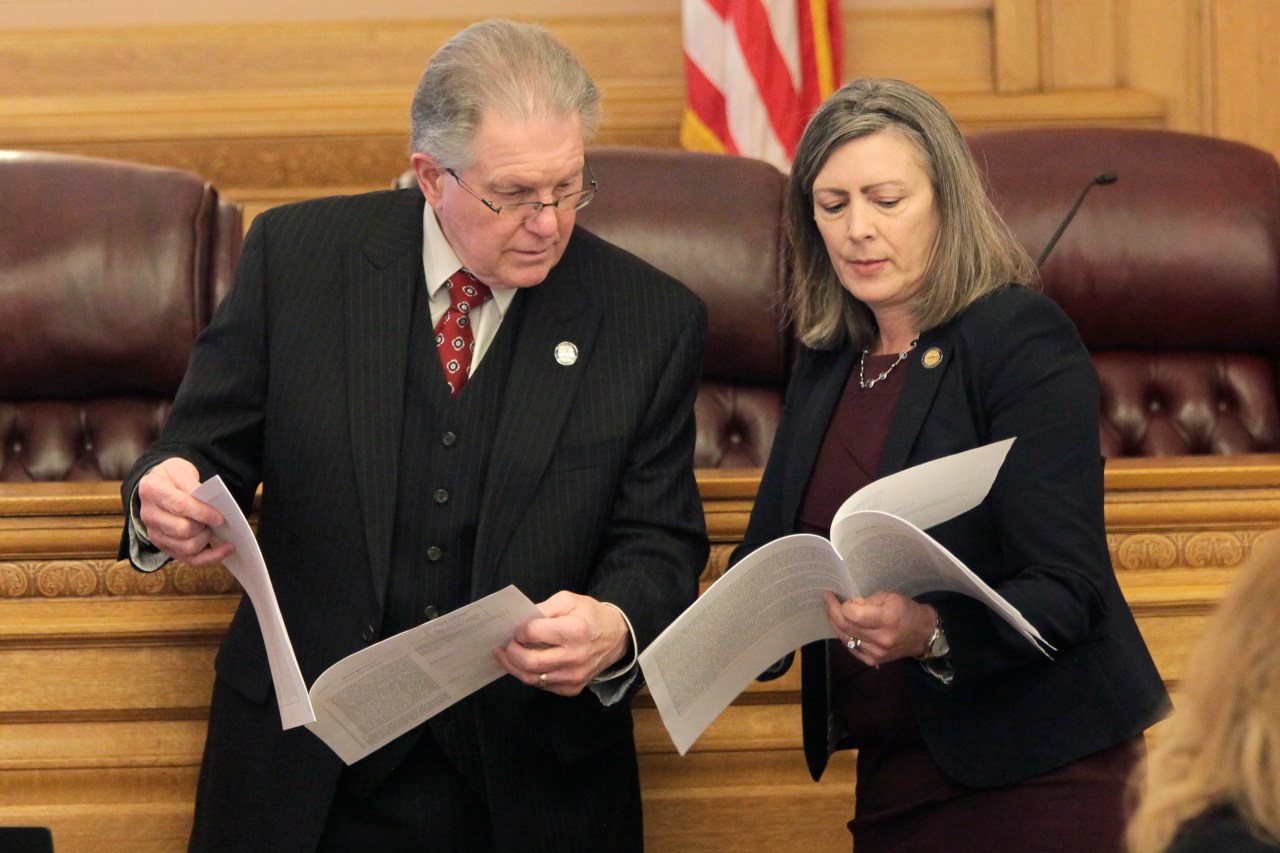 TOPEKA, Kan. (AP) — Efforts to propel Kansas’ renewable energy future have stalled, mired in a legislative stalemate. At its center is a former television weather personality who uses his chairmanship of a key committee to promote dubious claims about green energy and to highlight complaints from opponents of wind and solar energy projects. .

Republican Sen. Mike Thompson’s backlash against renewables pits him not only against environmentalists, whose bills can’t be voted on in his committee, but also against big utilities and his GOP colleagues, who say that his measures to restrict new wind turbines and solar power farms go too far.

As GOP-led state lawmakers continue to resist the global push to ditch fossil fuels, Kansas is unusual in giving such a prominent political role to someone who publicly denies the link between human activity and the climate change. Resistance to tackling climate change “is now starting to turn a little more towards solutions,” said Mandy Warner, director of climate policy and clean air at the National Environmental Defense Fund.

Thompson is a 64-year-old, often affable, retired TV weatherman from the Kansas City area. His focus as chairman of the utilities committee on fighting wind companies and building a case against renewable energy has left his committee time for nothing else.

“This is the worst possible place to put that person,” said Rabbi Moti Rieber, executive director of Kansas Interfaith Action, which lobbies on climate issues.

Even with the conservative leaning of the Republican-controlled Kansas Legislature, environmentalists had hoped for modest green initiatives, such as exploring the potential of green hydrogen, doing more to encourage energy efficiency or increasing the number of charging stations for electric vehicles along highways.

Yet advocates of renewable energy are making progress even in conservative states by highlighting their potential for job creation and economic growth. For example, Oklahoma formed a task force last year that drafted proposals to launch a hydrogen industry there.

“There may be individuals who don’t believe in climate change or whatever, but they don’t drive the political agenda because economic opportunity is what really drives the political agenda,” said Kimberly Svaty, lobbyist for a renewable energy alliance. companies and investors with projects from Texas to the Canadian border.

In Minnesota, as Republicans tried to roll back “clean car” standards, GOP state Sen. Bill Ingebrigtsen, who chairs a committee on environmental spending, laughed when reminded of his comments from 2011 calling climate change a “sophism”. He agrees now that the climate is warming and says that the real question is, “Can we possibly make a change as human beings?”

Kansas renewable energy advocates argue that Thompson’s opposition dates from an earlier political era. Kansas has moved from renewables from just 1.1% of its power generation capacity in 2002 to 50% today, supplanting coal as the primary source, according to federal data.

Thompson said he stood up for frustrated homeowners who are overwhelmed to counter pressure from big business on them, their neighbors and local authorities. He said landowners are being treated ‘like they’re collateral damage’ and ‘I’m just sick of it’.

He views renewable energy as unreliable and ultimately expensive, both descriptions outdated. It also promotes highly controversial arguments that the “flicker” of noise and light from turbine blades creates health problems.

Thompson also stands out with comments like his response to scientists’ concerns that coastal cities are in danger as polar ice caps melt and sea levels rise.

“Only 20 percent of Earth’s history has had polar ice caps. People assume they’ve always been there, and that’s not the case,” Thompson said in an interview. Earth has had ice caps at both poles for about 3 million years; modern humans have been on the planet for about 300,000 years.)

Thompson’s defenders include landowners who are fighting against wind company plans to build turbines in rural areas.

Debra Cramer initially admitted to being “amazed” by Thompson’s willingness to go far beyond her district to talk to landowners. She tracked leases from a German energy company for land for new turbines around her home in Labette County, southeast Kansas. In December, voters recalled one of their three county commissioners.

Senate Speaker Ty Masterson, a conservative Republican from the Wichita area, said he named Thompson chairman of the public services committee early last year because of his professional background and passion for public services. energy issues.

“This whole process is about asking questions,” Masterson said.

Thompson, a U.S. Navy weather observer and forecaster in his youth, retired as a television weatherman in late 2018 after spending most of his career in Kansas City. Local Republicans picked him to fill a state Senate vacancy in early 2020, and he won a full four-year term in November.

He regularly pushes his colleagues to question the scientific consensus, recently telling them in a committee meeting that throughout his career, “I’ve done my own homework and thought outside the box.”

But when Thompson pushed his committee to approve a bill requiring new wind turbines to have technology to dim their lights at night, the members tabled the measure.

Senator Rob Olson, a conservative Republican from the Kansas City area, told him, “I don’t want to send the message that I don’t want wind in this state.