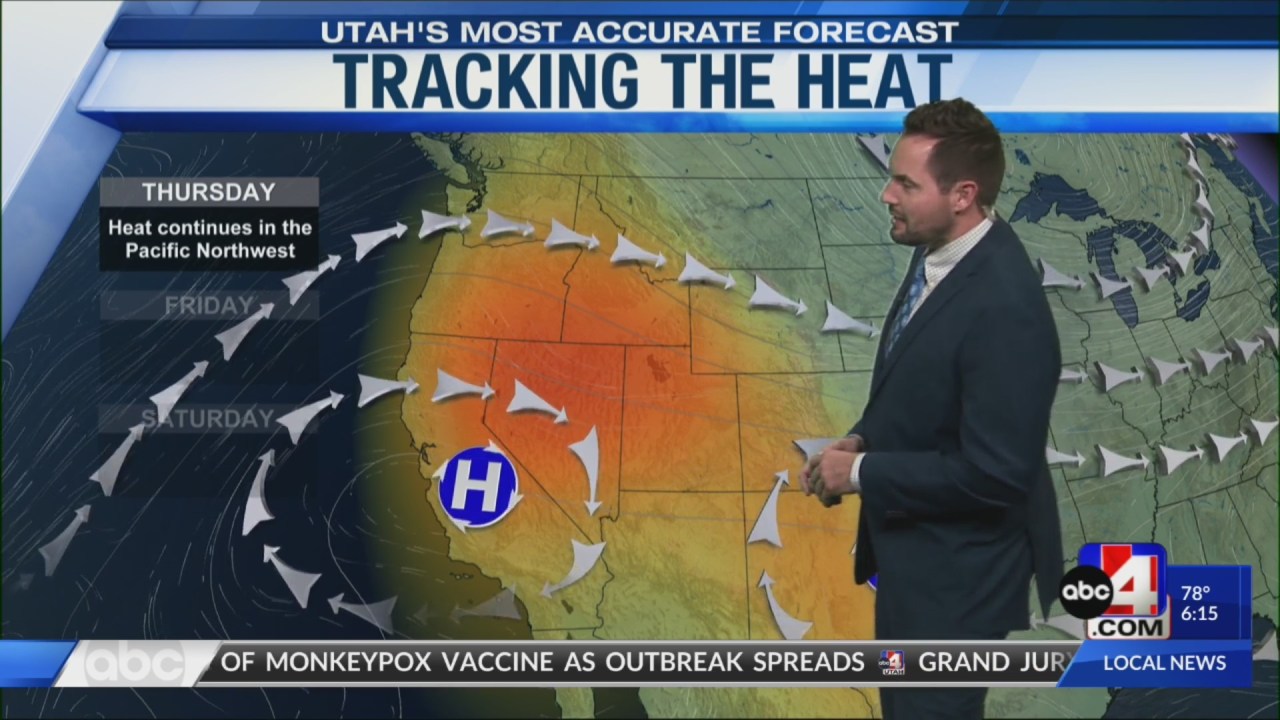 SALT LAKE CITY (ABC4) – Happy Thursday Utah! We close on weekends! So far this week, every day has followed a similar pattern with monsoon storms in the south and intense heat in the north.

We won’t see too many changes today, but there will be some subtle changes as the monsoon humidity tries to move through northern Utah. Before we get into the forecast, it’s important to note that Salt Lake City hit 100° for the 18th time this year. The record number of days in a year is 21, so we’re not that far off! Additionally, we hit the 100° mark for the 15th time this month, tying the record for the number of times we saw triple-digit heat in the month of July. The only other time this happened was in 1960!

We’ll start in southern Utah where we’ll see more showers and scattered thunderstorms, with the best chances along and south of I-70. The flood watch for southern Utah has been extended once again through Thursday and extends from lower Washington County east to Glen Canyon and Lake Powell, then north into the Wayne County.

This watch also includes Zion National Park, Western Canyonlands, and Capitol Reef National Park. Residents and visitors to Southern Utah should monitor forecasts and prepare for possible flooding, especially in flood-prone areas. i.e. slot canyons, dry washes, smooth rocky areas, low lying areas and regions with recent burn scars. With flash flooding being a probability in most national parks, Thursday is probably a good day to avoid any hiking in the slot canyons. The best chance of thunderstorms will occur in the afternoon and early evening, coinciding with peak daytime heating.

In recent days, monsoon moisture has been pinned to southern Utah due to high pressure from the northwest. During the day the moisture will start to try to move north as the high weakens a bit. While most of northern Utah remains dry with heat similar to the past few days, there will be some more cloud cover and on higher ground, including the Wasatch Back and Uintas, a few isolated storms will be possible. Isolated storms also appear to be a slight possibility in the Uinta Basin. As for the Wasatch front and valleys, it’s partly cloudy with highs mostly in the 90s as Salt Lake City makes another run at 100.

By Friday, enough moisture may work north to introduce a slight chance that storms in northern Utah will include the Wasatch Front, but as we’ve grown accustomed to, the best chance will remain south. Temperatures may drop a degree or two in northern Utah, but it won’t be much.

By the weekend we are back to dry skies and higher heat in the north with more chance of storms in the south, but early next week another wave of humidity from the monsoon seems possible and there is a chance that we will see this surge statewide, stay tuned!

Take-out? Storms are likely with potential for flooding in southern Utah as northern Utah continues with above average heat.