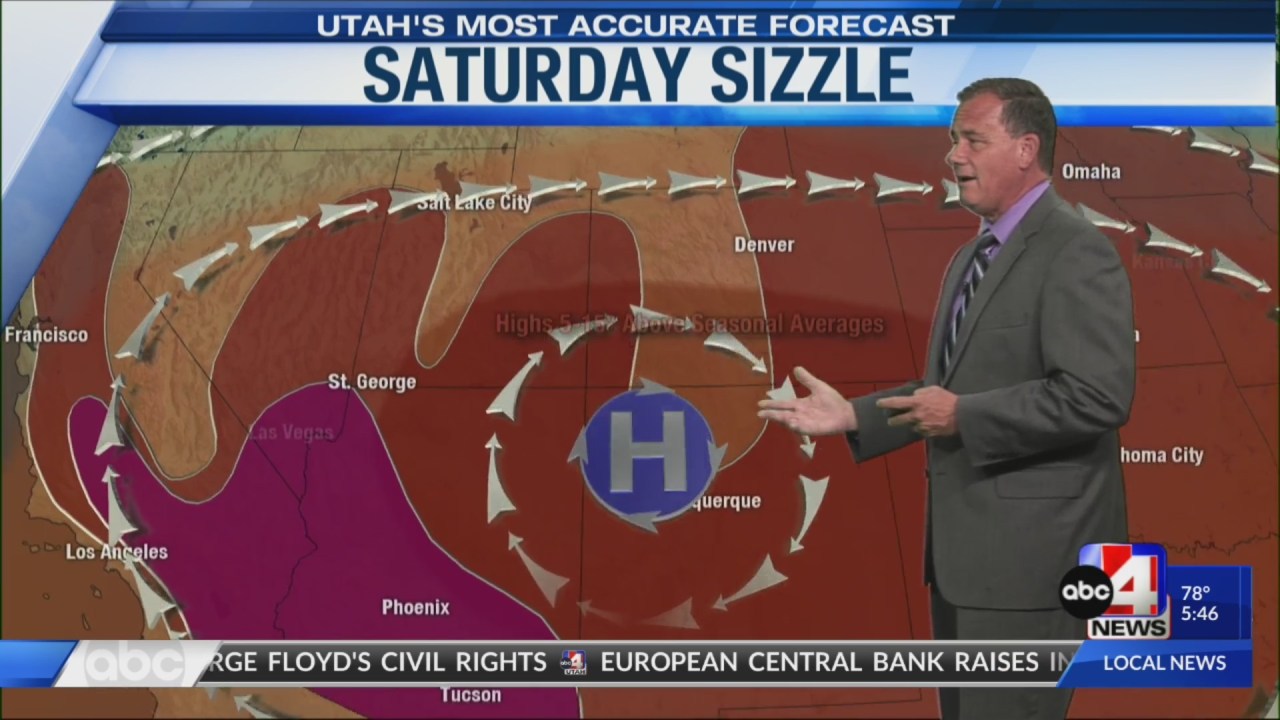 The excessive heat warnings and heat advisories we have for parts of central and southern Utah remain in effect, but the heat will not be limited to the southern two-thirds of the state. Along the Wasatch front, daytime highs will approach the century as Salt Lake City threatens the previous high of 104. Even Logan will see the upper 90s as Park City nears 90 degrees.

CELEBRATE: Pioneer Day Parade and Rodeo kicks off this week at SLC

Some will see some relief as isolated showers and thunderstorms are possible in northern, central and southeastern Utah. Like the past two days, storms will favor higher elevations, but some valleys, including the Wasatch Front, have at least a slight chance of storms. Barring any storms, skies will be mostly sunny to partly cloudy with the heat.

In lower Washington County, east to south-central Lake Powell, an excessive heat warning is in effect. As part of the warning, daytime highs are expected to reach between 100 and 107, St. George and Zion will likely reach or even exceed 110! The warning will expire for Lower Washington County at 9 p.m., while the warnings for Glen Canyon and Lake Powell will expire Saturday evening.

TRAGIC: Remains of woman who went missing in 2010 found in Duchesne County

Over the next few days, take the necessary precautions to beat the heat. Stay hydrated, limit time outdoors, find shade, check those without air conditioning, and look before you lock up! Never leave children or pets alone in the car. Cracking the windows doesn’t help.

As we enter the Pioneer Day weekend, we will see some changes in the weather as the high pressure bringing the heat will begin to lessen its grip. This will allow the monsoon humidity to start reintroducing itself. Humidity will steadily increase in southern Utah from the weekend into early next week and by Monday there will be a good chance of showers and thunderstorms. The question is how far north this moisture will travel.

On Saturday we will see highs dropping around 2-5 degrees in most places with isolated storms possible, primarily along and east of I-15. By Sunday into early next week, it’s a safe bet there will be enough moisture for scattered storms across the southern two-thirds of the state. There may be occasional bursts of humidity to bring at least a slight chance of showers and storms to northern Utah, but we’ll see how that plays out. Given the uncertainty, we will be opting for at least a slight chance of showers and isolated thunderstorms for Wasatch Front and Wasatch Back on Saturday and Sunday through early next week.

A CLOSER LOOK: What’s causing the increase in cougar sightings?

Another product of decreasing high pressure and increasing humidity will mean just a little less heat, but it won’t go away completely. Along the Wasatch front we will settle into a series of daytime highs in the upper 90s to around 100 from the weekend into early next week. Meanwhile, in southern Utah, where we’ll see deeper humidity, temperatures will drop a bit more in comparison. We could even see St. George slipping back into the upper 90s by Tuesday! Stay tuned.

Remember to always stay ahead of weather changes with Utah’s most accurate forecasts, both live and online. We are There4You!