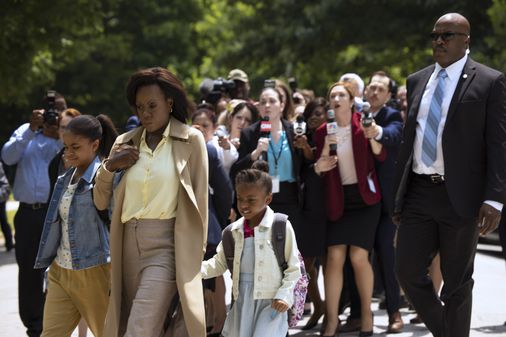 A shower of intriguing TV shows in April

“Anatomy of a Scandal” This anthology series – each season will feature a different controversy – is from Melissa James Gibson and David E. Kelley, TV’s busiest man. First, the “Undoing” type story – based on the novel by Sarah Vaughan – of an adulterous politician in the UK accused of sexual assault. Rupert Friend stars, with Sienna Miller as his wife and Michelle Dockery as the lawyer trying to bring him down. (Netflix, April 15)

“Roar” Apple TV+ hopes the numbers will be “too big to ignore,” as the song puts it. From “GLOW” creators Liz Flahive and Carly Mensch, this anthology series is a dark, comedic look at women’s lives. It is based on a collection of stories by Cecelia Ahern, and each episode will depict a different fable. Want stars? Look for Nicole Kidman, Issa Rae, Cynthia Erivo, Merritt Wever, Betty Gilpin and Alison Brie. (Apple TV+, April 15)

“The First Lady” What “The Crown” does for Queen Elizabeth’s reign, this show does for the women behind the men who became presidents of the United States. The first season pits Michelle Obama, Eleanor Roosevelt, and Betty Ford, played by a trio of Hollywood’s finest – Viola Davis, Gillian Anderson, and Michelle Pfeiffer, respectively. Each episode bounces around important moments in the lives of each of these women and the different ways each has changed the role of First Spouse. (Showtime, April 17)

“A very British scandal” How would you like your dish? Class, please. This three-episode mini-series is produced by the same team behind Hugh Grant’s excellent “A Very English Scandal”. This time the whirlwind of deception involves the Duke and Duchess of Argyll, whose 1963 divorce trial sent the tabloids buzzing with evidence including X-rated photos, a fake letter and diary entries. Claire Foy and Paul Bettany play the role of the warring couple. (Amazon Prime Video, April 22)

“The Man Who Fell to Earth” Loosely based on Walter Tevis’ 1963 novel and Nicolas Roeg’s 1976 film starring David Bowie, this serial adaptation was created by Jenny Lumet and Alex Kurtzman. Chiwetel Ejiofor stars as an alien who arrives on Earth at a pivotal moment in human history, and Naomi Harris plays the scientist who befriends him. Also in the cast: Rob Delaney, Jimmi Simpson, Kate Mulgrew, Clarke Peters, Sonya Cassidy and Bill Nighy. (Showtime, April 24)

“We own this town” Whenever David Simon of “The Wire,” “The Plot Against America” ​​and “Treme” comes up with something new, it’s worth a look. This one, created with George Pelecanos, is a six-episode miniseries about the Baltimore Police Department’s corrupt gun-tracing task force. Jon Bernthal, Josh Charles, Treat Williams and Jamie Hector are some of the household names in the cast. (HBO, April 25)

“The Offer” Many won’t be able to refuse this 10-part series on the making of one of the best films of all time, “The Godfather” by Francis Ford Coppola, which is currently celebrating its 50th anniversary. Written by Michael Tolkin of “The Player”, it stars Miles Teller, Juno Temple, Colin Hanks, Giovanni Ribisi and Matthew Goode as Robert Evans. You’ll never guess who has a recurring role as Marlon Brando – really. It’s Justin Chambers from Grey’s Anatomy. (Paramount+, April 28)

“Under the Banner of Heaven” Jon Krakauer’s 2003 true-crime book about Mormon fundamentalists and the 1984 murder of a Utah woman and her infant daughter was adapted into a seven-episode miniseries by Dustin Lance Black (” Milk”). Andrew Garfield stars as a Mormon detective whose faith is shaken by the case, with Daisy Edgar-Jones as the murdered mother. (Hulu, April 28)

“Shining Girls” Elisabeth Moss stars in this eight-part adaptation of South African writer Lauren Beukes’ 2013 novel — which is enough to get me in. The mousse never disappoints. The story goes that Moss’ reporter in Chicago learns that the man who attacked her – played by Jamie Bell (Billy Elliot!) – is a time traveler who must kill to survive. (Apple TV+, April 29)

“Ten Percents” The entertaining French comedy “Call My Agent!” gained many fans with Netflix. This is a British adaptation of this series which follows a group of talented agents and their diva clients. The regular cast includes Jack Davenport and Jim Broadbent, and famous characters playing comedic versions of themselves include Emma Corrin, Dominic West, Helena Bonham Carter and David Oyelowo. (Sundance Now and AMC+, April 29 – then on BBC America Linear from May 1)

“You Better Call Saul” is back for the first half of its sixth and final season. (AMC, April 18)

“Barry” is finally back for season three, with lead character Bill Hader still trying to put the contract killing behind him. (HBO, April 24)

“Ozarks” ends for good with the final seven episodes of the family drama. (Netflix, April 29)

“Grace and Frankie” gives us the last 12 episodes of the seventh and final season. (Netflix, April 29)