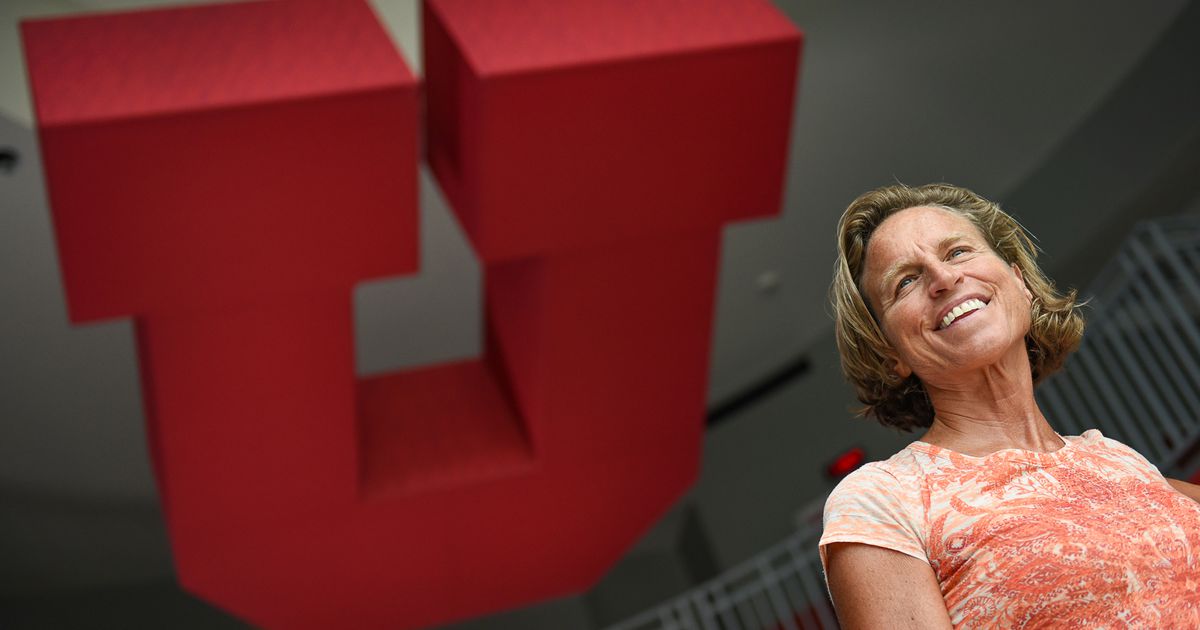 Between brief glances at her cell phone and sweeping the vast soccer field for a perfect place to rest and pose, she looks up to say hello to everyone. Because everyone knows her and she still has a job to do. You may not all know her name – she would much prefer it – but her work over the past four decades in Salt Lake City has played a key role in the rapid rise of athletics in Utah. So, on this weekday morning, one of her last weeks at work, the irony is not lost on Liz Abel. She is trying to find a place for a photo that will help her tell her story.

For years and years, she has often helped facilitate such requests when photojournalists have taken to campus looking for a new photo to accompany a student-athlete’s profile or story. Now she is the center of attention. She would prefer not to be, but she gives up any hesitation. After 36 years doing just about everything, Abel is finally perched on the spiral staircase between the first and second floors of the Eccles football complex. When she’s not laughing at herself, she points out anecdotes plastered on all the walls.

She shows the plaque that leads players from the facility to the weight training and fitness facility that former great Ute Alex Smith helped build. In 2004, she said, as Urban Meyer and a bunch of well-known names changed that state’s sporting landscape forever, Abel and Smith used to organize series of phone interviews with members of the national media in the wee hours of the night. He had training and class, but the Utes were making their way onto the national stage, and Smith was a Heisman Trophy contender, a Salt Lake City superstar. So they’ve been planning maintenance after maintenance for weeks this fall.

Those two seasons under Meyer, Abel says even now, were a brilliant blur – just everything she loved about the job she’s always coveted since her twenties. It was chaotic at times, unexpected as everything, because even now, who thought Utah could go undefeated? Who thought Utah could go unbeaten twice? After 36 years in the Utah Red, Abel is retiring as Senior Assistant Director of Athletics and Director of Communications. It’s about time, she said. But before his last day, July 31, Abel is asked to rehash four decades of hard work, dealing with old-school media members versus the New School blogosphere realm, and all the while knowing that she loved every minute of it.

How did she do it all these years?

Here is Utah coach Kyle Whittingham, who has worked alongside Abel since the 1990s: â€œWow,â€ he said. “Where to start?”

A sports information director, for those unfamiliar with the gray area where the world of varsity athletics and the media intersect, is a primary point of contact. Good or bad news, rumors or truths, this is the place to go to complete your due diligence.

This is where you are going to feature a feature article or profile, or photo portrait of an athlete somewhere after training or elsewhere. This is where you request a spot in a press gallery at home or on the road. The list is long too. Now, as she sits in a chair in the same room where Whittingham gives her weekly press conferences, she can only laugh because when people ask her how she managed to get the job done and grow with the advent of various new media, the internet, social networks and just about everything in between, she has an inescapable answer.

â€œI’m saying this job isn’t even the same remotely,â€ she says.

Not even close, really.

In the ’80s, Utah athletics wasn’t exactly a booming pace for any aspiring sports writer. The basketball teams were pretty good. Gymnastics was a contender, as was skiing. But in football, the Utes were the second fiddle to the BYU Cougars of LaVell Edwards, and have been for some time. Abel’s first year in Utah was the year BYU won the national title in 1983-84. Sports coverage, of course, wasn’t close to the 24/7 news cycle it is now.

When she became one of the country’s first SID women in 1989, she decided to help Utah better cover a football program that didn’t have much history of consistent winning. â€œI hope I wasn’t too much of a plague. I was at everything. I was always in the ears of reporters,â€ she said. The field of sports media was old compared to what it is today, when journalists and coaches often sympathize together in unofficial storylines so rarely seen now.

Now? Suffice to say, it’s hard to imagine this current media world around varsity athletics and the Utes 30 years ago when Abel’s first year as SID football began. Utah’s winning ways have garnered more attention. With more attention came more reporters, and later more fan-run blogging sites that wanted to participate in the Utes’ successes as well. Utah’s eventual inclusion in the Pac-12 conference only added to the hype and more recorders and cameras.

Trail Blazer After 36 years in the Utah Track and Field Department, Liz Abel is retiring on July 31. Abel oversaw the communications department within the athletics department for decades. She became one of the first female directors of sports information for college football in 1989 and has also overseen the Utah gymnastics program since the 1980s.

Now is the time to take the star players off the pitch during pre-workout stretches for a quick TV, print or radio interview. The protocol has changed as more faces representing sites show up to interview star student-athletes. Expectations are higher than ever, which means so are the stakes.

â€œWith so many different media now, it was the 10am newspaper and news and that was it,â€ Whittingham said. â€œAnd now it’s so much more involved. Everything is now under the microscope. All you doing is under a microscope now. I couldn’t have done it without her. She was the main reason I was able to take on this role dealing with the media and the PR aspect of the job.

The only time Chris Hill remembers chatting with Abel is when he told her that she needed to take time off. Maybe a vacation somewhere. Take a break.

There have, however, been several opportunities to go elsewhere over the years. Places with more perceived prestige. Big cities and student bodies. More money. But Abel said Hill had convinced her to hang in there, that if she trusted what they all set out to do decades ago, the Utes could become a player on the national stage. During staff retreats in the early ’90s, Abel said, they talked about the plan required to, perhaps, someday get into the Pac-10 of the day.

â€œIt was a big priority and what people didn’t know and what I would like them to know is that she was more than her profession,â€ Hill said. “She was a key person in the decisions we made and helped me and the university move in the right direction.”

The Pac-12 process was somewhat memorable as his phone never stopped ringing. Members of the national media and local reporters kept dialing in asking for an update or a scoop on the Pac-12 rumors. A writer called one night to ask for information, saying he was getting married in two days and that if the news broke and he didn’t have an article ready for publication, he would be fired on the- field.

“Now is this guy’s life and marriage on me?” Abel laughed, remembering.

Managing personalities – from coaches and players to incessant journalists – is and always has been part of the job. But it extended far beyond that too. There has to be an encyclopedia of information and facts, you have to keep track of archival statistics and figure out how to find old box scores that Abel finally made in the 1980s. She also started archiving records. photos of student-athletes over the decades. She helped take Utah’s vast Internet and social media presence off the ground. (Yes, she even remembers when she had to stress out on the athletes’ MySpace pages).

The explosion of social media “rocked our world,” she said. But like everyone else, they rolled with it.

Much like the time a Philadelphia Inquirer reporter called her landline at odd hours of the night to assess a potential Top 25 ranking for the Utah women’s basketball team. Or the time when Utah’s pre-fax era fax machine caught fire because it was overworked during an NCAA tournament shutdown in town. And the time Rick Majerus asked Liz to oversee basketball when the Runnin ‘Utes were kings in those areas.

In 36 years, Liz Abel has helped Utah tell the stories of its athletes, future Heisman contenders, No.1 picks, BCS busters, Olympic hopefuls, perfect 10 landers, head coaches somewhat closed and countless others. She did it by letting the others in. Sometimes from a distance, sometimes not, but always knowing that there was information to relay to a fan base so hungry for change, so hungry for victories and so eager to be entertained.

Strengthening Utah’s Economy by Creating a Culture of Inclusion

Good and bad news in the WSU-Utah weather forecast