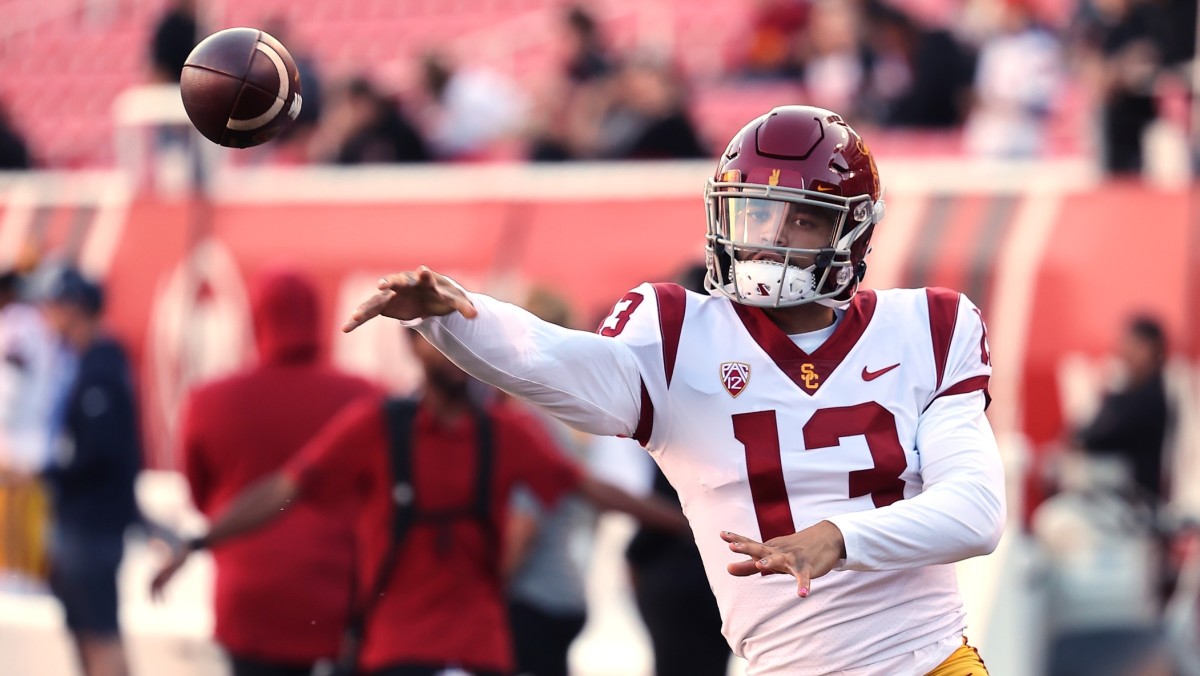 Lincoln Riley’s offense racked up 42 points behind five touchdown passes from Caleb Williams and a few unlikely contributions from receivers lower in the depth chart in USC 43-42 loss to Utah Saturday night.

The Trojans looked incredibly snappy during the early discs of the game, but Utah either adjusted or USC ran out of games in the book that the Utes had yet to see in the theater.

It certainly felt like Riley was hiding some of the offensive versatility this team is capable of, like there was no need to open the playbook against any of the six teams USC had beaten before. this week-end.

Maybe that was the majority of the stuff, or maybe it was just scratching the surface, but only time will tell what USC has in the bag for the rest of this season.

Statistically, Williams had a very strong showing, amassing over 400 yards of offense and five touchdowns in the air on a mix of targets. His third down from 55 yards in the first set of the game really signaled that Utah wasn’t ready to handle a dual-threat quarterback of his caliber.

Williams had the strongest pass protection put up by the veteran offensive line early on this season, but the pocket wasn’t as comfortable as the game progressed. He ended up getting sacked four times for a total loss of 40 yards and didn’t have the space to run the two-minute drill at the end of the game.

His backfield partner, Travis Dye, said he could only tell Williams to “keep your head up, kid. It’s not about you at all. You played phenomenally tonight. He’s a wonderful quarterback, and he’s going to bounce back from this game…

Williams completed 25 of his 42 passes, a ratio likely reflecting a touch below the quality of his passing performance after factoring in forced throws and incompletes to cap both halves.

Solid outing for the young quarterback, visibly moved after the game. Yes, the offense looked better in the first half than in the second and was unable to do so in a short-term scoring situation, but Williams led their offense to 42 points, and Dye is right that this loss can’t be pinned on No. 13. Alex Grinch’s defense just needs to be better.

Again, not much from Austin Jones, who only carried the ball four times after not receiving the rock last week. Riley expressed after the Washington State game that Jones probably should have seen more ground, but didn’t seem to match that feeling with the action of playing him against Utah.

Raleek Brown was credited with just one carry for two yards and wasn’t targeted in the passing game – maybe Riley still keeps a few cards close to his chest when it comes to the odd open-field flurry of the recruit. He will likely be a valuable return at some point during his time at USC.

Since USC doesn’t actually have a special teams coach, it’s not worth exploring what might be considered a below average special teams performance, but it is a good point of criticism for Brown. He danced to the outside on a kick return to start a USC drive at the 30 after missing a few defenders, but confidence then got the better of the young fullback.

Brown might be the fastest player on the USC team and has a habit of burning everyone in high school, but he has to learn how to take touchbacks. It’s tempting for Brown to give himself a chance to bring home that magic that USC football hasn’t seen on special teams since Adoree Jackson and Nelson Agholor, but his tendency to hesitate and then get the ball out anyway has killed USC. on several discs on Saturday.

Brown hasn’t produced at the level his Trojan debut against Rice might have indicated he would, but he has a lot to learn and will no doubt be a nightmare for defenses once he fully exploits his abilities. at university level.

Predictably, if not obviously, Dye did his thing averaging around seven yards per carry on his way to 76 yards and a touchdown, although he saw a reduced workload compared to last week when the racing game did so well. 43 receiving yards (36 after receiving) got his scrum count back above the century mark, but maybe Riley didn’t call 26 enough times on Saturday.

Dye was a shell of his usual brilliant post-game. After playing four years at Oregon, he knows as well as anyone how tough it is to leave Rice-Eccles Stadium with a win. Side note: The reported attendance of 53,609 would be a record for the Utes who have – allegedly – sold out every home game since 2010.

“You know, it’s very tough, especially on this pitch. Personally, I’ve never beaten this team on this court, so you know there’s a personal factor, but in the end we lost,” Dye said.

He went on to explain that he believed USC would win until the last second, and the triple zeros on that slightly twisted scoreboard were a tough pill to swallow.

A+ is a tempting grade here considering the quality of USC’s offensive performance on Saturday, but it just wasn’t quite there. Mario Williams played perhaps his best game of the season, opening wide to fellow Williams at critical moments to convert huge third downs.

Williams caught just four passes but took advantage for 145 yards, including a dramatic catch looking straight over his head, reminiscent of Willie Mays’ famous World Series catch. (If you know you know, if not go get some baseball highlights, it’s October)

Williams dropped a pass, but that could have resulted in three extra points for the Cardinal and Gold just before the end of the first half. He was also flagged for a false start – inexcusable for a wide.

Exclude Travis Dye from “receivers” but include tight ends, and Williams found eight of the nine receivers he was aiming for. Cornerback Prophet Brown also appears on the official stat sheet with a target, but I guess Tahj Washington, who also wears No. 16, was just misidentified on a play. Washington went for four catches and 35 yards, almost finding the end zone on what was visually a very satisfying swing route.

Before falling awkwardly with a frightening leg injury, Jordan Addison had seven catches for 106 yards and a touchdown on – you guessed it – a swing road. It’s almost as if the Trojans should have returned to this concept after finding success on its two opening discs.

More seriously, Addison is incredibly important to this team’s offensive production and versatility, and they need Williams’ favorite target back as soon as possible. If he is absent for the year, it is a devastating blow for the Trojans.

It was encouraging to see CJ Williams (too many guys named Williams) getting reps even though he didn’t catch a pass. A few other guys in the rotation were also highlighted, with TE Josh Falo finding the end zone twice as well as Kyron Hudson once and Michael Jackson III on his only target of the season.

Still, the passing game got a bit sluggish at times later in the game, and the two-minute drill wasn’t executed well. It can’t quite be an A+.

This group started very strong; Williams had plenty of time in the backfield, an encouraging sign for a stronger line in the running game.

The running game also worked well, for the most part, allowing Dye to do it on the court.

Consistency, and again, playing a four quarter game was still lacking, however.

“Certainly there will be corrections that will need to be made and addressed. This is certainly something that will be dealt with tomorrow. So we’re just looking forward to proving them right and just being better the next time they come back,” said right guard Andrew Vorhees.