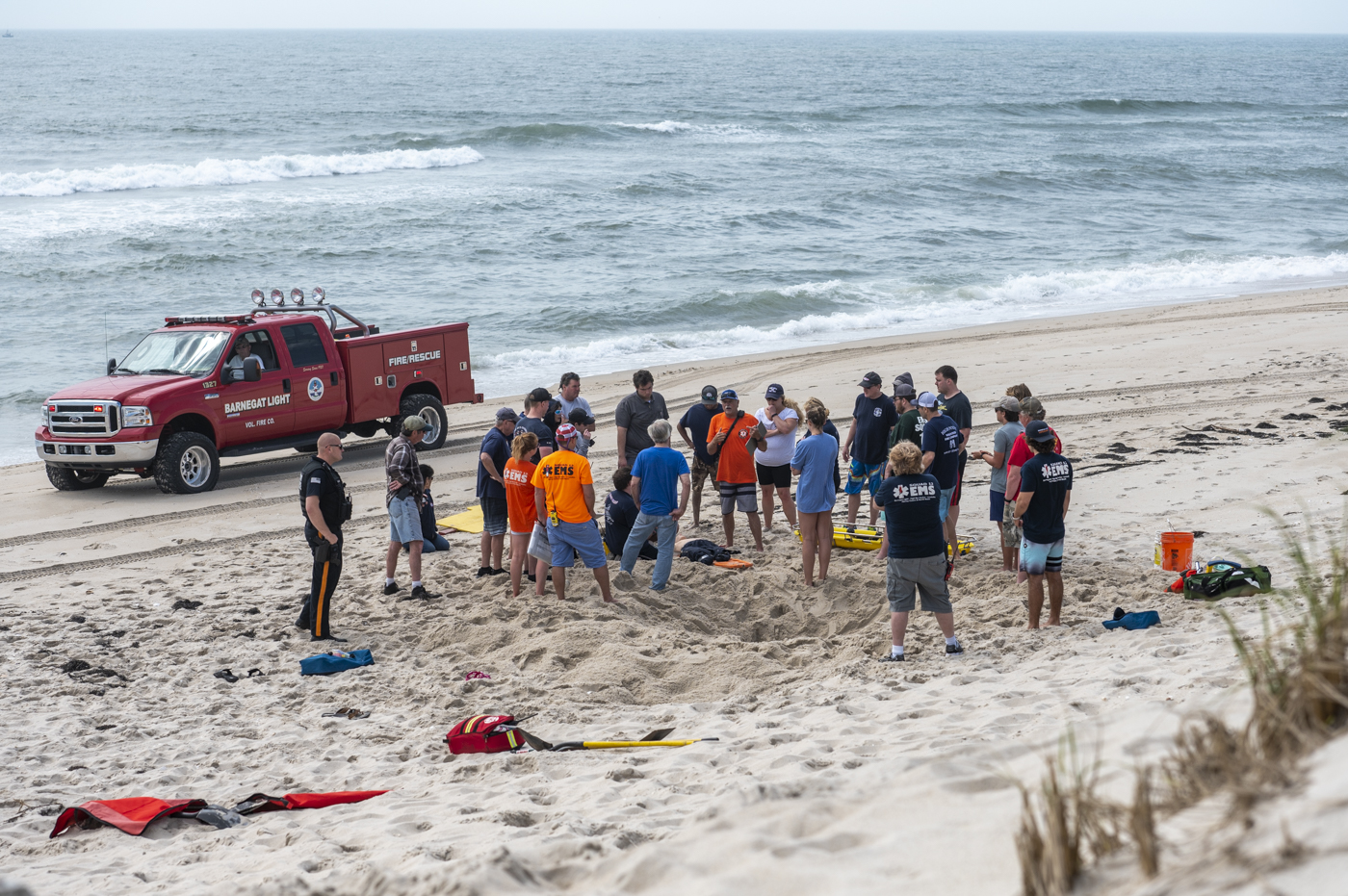 ALL TOGETHER: Bob Selfridge (above center) interrupts a training exercise he led on the Coast Avenue beach in Loveladies on Sunday for first responders at LBI’s North End to discuss technique. The drill took place less than a week after a teenager visiting from Maine died after being trapped by sand on a beach in Toms River on May 17. (Photos by Ryan Morrill)

The call sounded on a county radio station on Sunday morning – a sand hole collapsed with several victims. Emergency units on the north end of the island responded, immediately getting to work locating the area where the victims were last seen on Coast Avenue beach in Loveladies before the sands set in collapses on them. Simultaneously, calls were made for two helicopters to be dispatched and a request for heavy digging equipment from Barnegat Light and Harvey Cedars to respond.

While Sunday’s roll call was a real-time training exercise for emergency service volunteers from Barnegat Light, High Point and Surf City, it came less than a week after 18-year-old Levi Caverly of Maine, was killed on a beach in Toms River when the hole he dug with his sister collapsed, trapping them both. Caverly’s sister was rescued and treated at the scene, according to a report released by Toms River Police.

The May 17 incident came just days after a 13-year-old in Utah died when the hole he was digging at Coral Pink Sand Dunes State Park crashed down around him without Warning.

“It’s such a tragedy. These are the kind of calls that make you burn out. This is a low frequency, high intensity incident,” Bob Selfridge, Barnegat Light Volunteer Fire Co. Lieutenant and Training Officer and Barnegat Light EMS Captain, said ahead of the training exercise.

He led sand slump training on the island for years and was trained by West Coast lifeguards.

“There is a method to our madness,” Selfridge said, noting that first responders rely on bystanders and good Samaritans to determine where to dig. “There is a difference in digging fresh, in a place where no one has dug before.”

After verifying the last known location of the victims, first responders attempt to locate the center of the area and deploy.

On Sunday, a large hole was dug halfway between the dunes and the edge of the ocean, large enough to bury a child-sized mannequin and an adult-sized mannequin. More than a dozen rescue workers formed around the hole, digging by hand to remove the sand as quickly as possible. Some of the volunteers were held by their ankles as they lay face down with their heads first placed in the hole, while others used yellow panels to shore up the hole.

It took less than 25 minutes from the time the call went out shortly after 10 a.m. to rescue the two dummy victims, 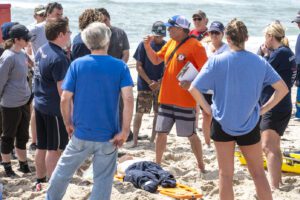 Selfridge said Monday afternoon. The adult victim was dug up and received life-saving medical attention within 8 minutes and 30 seconds, but remained in the hole because the sand buried him deeper. The child, a figurine made from a fire hose, was first pulled out of the hole.

“It’s a great time,” Selfridge said of the time it took to free the adult victim from the sand and begin medical treatment. “The real-time goal is to release them as quickly as possible and start working on them.”

Selfridge stopped the clock twice during exercise on Sunday, correcting a mistake or talking about the best way to do something. The first break was for a quick briefing before digging resumed. The next stop came after the adult dummy was pulled out of the hole and rescue measures began.

“It’s like a dance,” Selfridge said. “When you find a leg, you have to find where the head is in relation to the leg. You want to get to the airway as quickly as possible because the air doesn’t flow freely in the sand. What you have is what you have.

Not only is a sand collapse rescue very labor intensive and time consuming, but there is also only a limited amount of time before a rescue becomes a recovery.

“You can’t use metal tools” to dig because there’s no way of knowing how far away a victim is or what parts of their body are, according to Selfridge.

The rescue time factor is complicated because having too many people in the area can compress the sand, making it harder to get to the victim, he said. 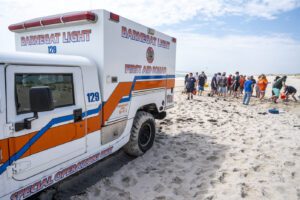 “Dry sand wants to fall” inside the hole because it’s unstable and moves easily from place to place, Selfridge said. “It’s easy to dig. You don’t see kids digging driveways.

Throwing water into the mix turns the sand into quicksand. Imagine, for a moment, playing with the sand on the beach. Unless a hole is shored up, the sides begin to drop into the center of itself. And while beachgoers often believe that hand-packed wet sand is stable and, therefore, safe, this is not the case. At a certain depth, this sand will crumble, filling a hole in a rapid and often continuous motion at different angles.

Bathers are generally reminded not to dig deep holes on the beach. When Selfridge trains Barnegat Light 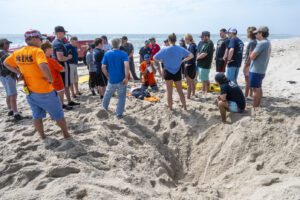 rescuers, the rule of thumb is to use the smallest person in the group as the standard for the depth of a hole to be digged. A hole dug in the sand should never be above that person’s knees, he said. The same lesson should be applied by beachgoers.

During the hour-long training, residents appeared at the top of the beach access road as planned on a Sunday morning a week before the unofficial start of summer on the island.

“Oh my God, what happened?” several asked, relieved to learn that this was a sand cave-in training exercise and somewhat surprised at the dangers of digging in the sand.

“It’s not just dangerous for them (bathers),” Selfridge said. “It’s dangerous for us too, if we ride an ATV or a truck. We cannot see the holes in front of us.