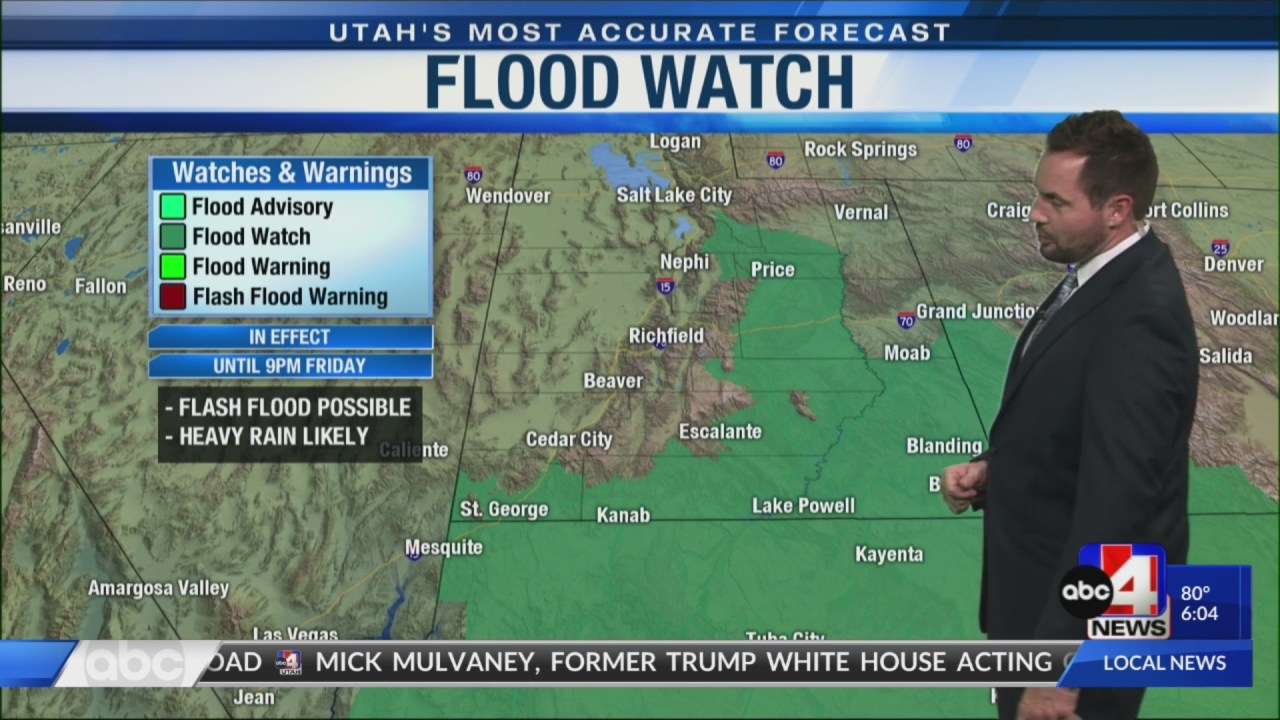 SALT LAKE CITY (ABC4) – Happy Friday Utah! We’re coming off another triple-digit hot day in Salt Lake City where it hit 100° for the 19th time this year. The record number of days in a year is 21 so we’re not that far off! Additionally, we hit the 100° mark for the 16th time this month, breaking the record for the number of times we saw triple-digit heat in the month of July. So far this week we have had a lot of heat in northern Utah with scattered thunderstorms in southern Utah.

As for the forecast, on Thursday we started to see moisture moving into northern Utah which brought storms to higher ground areas, but there may be enough moisture in place for a few isolated storms even in some of the northern Utah valleys including the Wasatch Front. , but like yesterday, the wet weather will favor higher relief. In southern Utah we will see more showers and scattered thunderstorms, with the best chances along and south of I-70.

EXPLORE: Four Utah resorts named best in the country for 2022

The flood watch for southern Utah has been extended once again through Friday and extends from lower Washington County east to Glen Canyon and Lake Powell, then north into the Wayne County. It was also expanded north to include the Wasatch Plateau, with the watch now extending through Emery and Carbon counties and for parts of Sanpete, Utah and Wasatch County.

Residents and visitors as part of the watch should monitor forecasts and prepare for possible flooding, especially in flood-prone areas. i.e. slot canyons, dry washes, smooth rocky areas, low lying areas and regions with recent burn scars. With flash flooding a probability in most national parks, today is probably a good day to avoid any hiking in the slot canyons. The best chance of thunderstorms will occur in the afternoon and early evening, coinciding with peak daytime heating.

With a little more humidity across the state, daytime highs will drop 2-3 degrees in northern Utah, with Salt Lake hitting just under 100, while southern Utah is experiencing temperatures similar to those of the last days. Over the coming weekend the high will begin to move west to east over our region. This will cause drier air to return to northern Utah with slightly less humidity in the south. Weekend skies appear to be generally dry in the north, with isolated to scattered storms remaining possible throughout the weekend.

HEALTH: These are the best hospitals in Utah

With less humidity in the north, we will increase the heat, as we have become accustomed to for much of this week. As we turn the page early next week, the high will be to the east and should bring a good push of monsoonal moisture that could be seen across the state. This would lead to a higher potential for wet weather and less heat. Stay tuned!