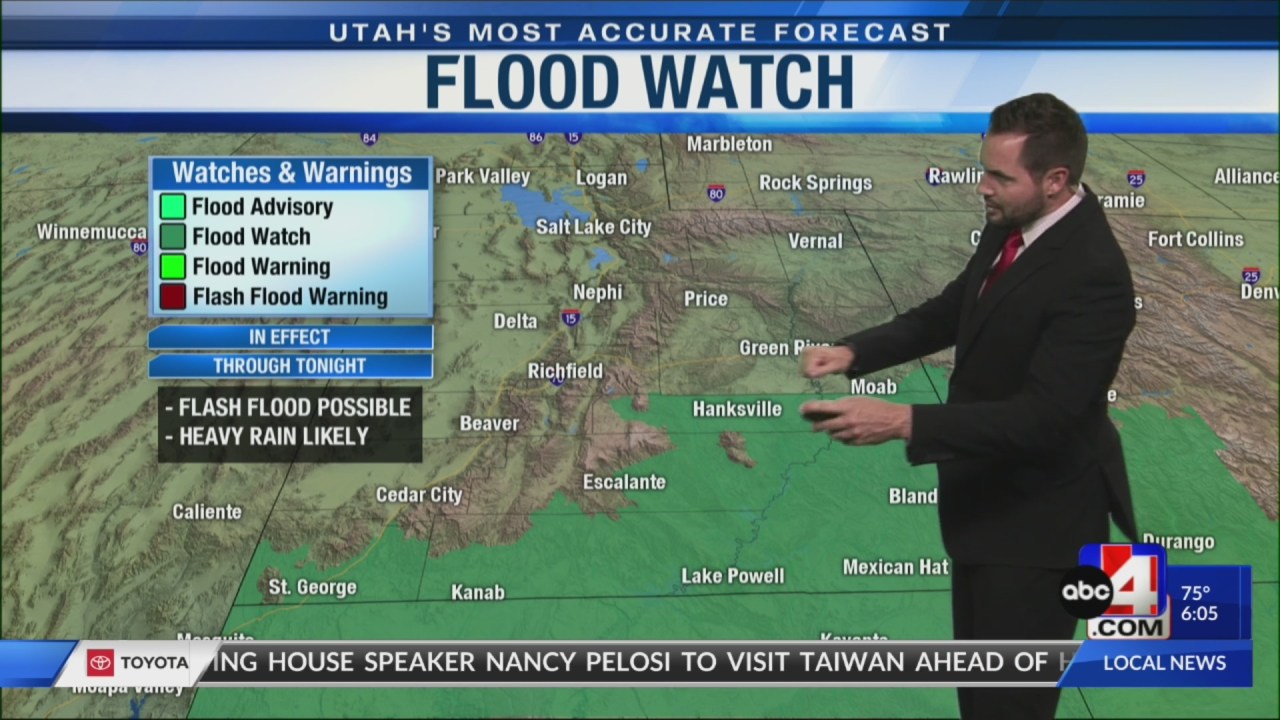 SALT LAKE CITY (ABC4) – Happy Wednesday, Utah! We’re halfway through the weekend and Wednesday’s weather won’t stray too far from what we’ve seen over the past few days.

The flood watch for southern Utah has been extended once again through Wednesday and extends from lower Washington County east to Glen Canyon and Lake Powell, then north into the Wayne County. This watch also includes Zion National Park, Western Canyonlands, and Capitol Reef National Park. With plenty of monsoon moisture in place, developing thunderstorms could bring heavy rain to these areas, leading to flash flooding.

Residents and visitors to Southern Utah should monitor forecasts and prepare for possible flooding, especially in flood-prone areas. i.e. slot canyons, dry washes, smooth rocky areas, low lying areas and regions with recent burn scars. With flash flooding being a probability in most of our parks, tomorrow is probably a good day to avoid any hiking in the slot canyons. The best chance of thunderstorms will occur in the afternoon and early evening, coinciding with peak daytime heating. Even for areas not included in the watch, periods of scattered thunderstorms with heavy rain will be possible for just about everyone along and south of I-70, so be on the lookout!

As southern Utah continues to experience more monsoon storms, northern Utah will experience more heat and rise an additional 1 to 3 degrees from Tuesday. This means that most along the Wasatch front will hit the upper 90s as Salt Lake City climbs just above the century mark at 101. Skies will be mostly sunny for the most part and there will be more visible haze wildfire smoke from neighboring states, which will lead to poorer air quality. There will also be a breeze at times in the afternoon.

Monsoon humidity will remain in southern Utah for the remainder of the week, which will help keep temperatures in check, with daytime highs remaining near or even slightly below average. In northern Utah, while the first half of the week was dry, models suggest moisture could seep in from the south starting Thursday as high pressure that pinned south of Utah relaxes slightly. This will translate to a fraction less heat and a little more cloud cover in our valleys on Thursday while higher elevations could see a wandering storm.

MORE: U of U research shows COVID-19 originated in the seafood market, not the lab

There is a chance that by Friday we could see isolated showers and storms in northern Utah, generally favoring the higher ground with a low chance that a few could find the valleys. Over the weekend we are back to mostly dry skies and heat in northern Utah with more monsoon humidity in the south. However, next week models are hinting at a more powerful surge of moisture that could move into northern Utah, but being more than five days away, that’s just something to watch for now. . Stay tuned!

Take-out? Another day to be aware of the weather in southern Utah with a continued risk of flooding as northern Utah receives sunshine and heat