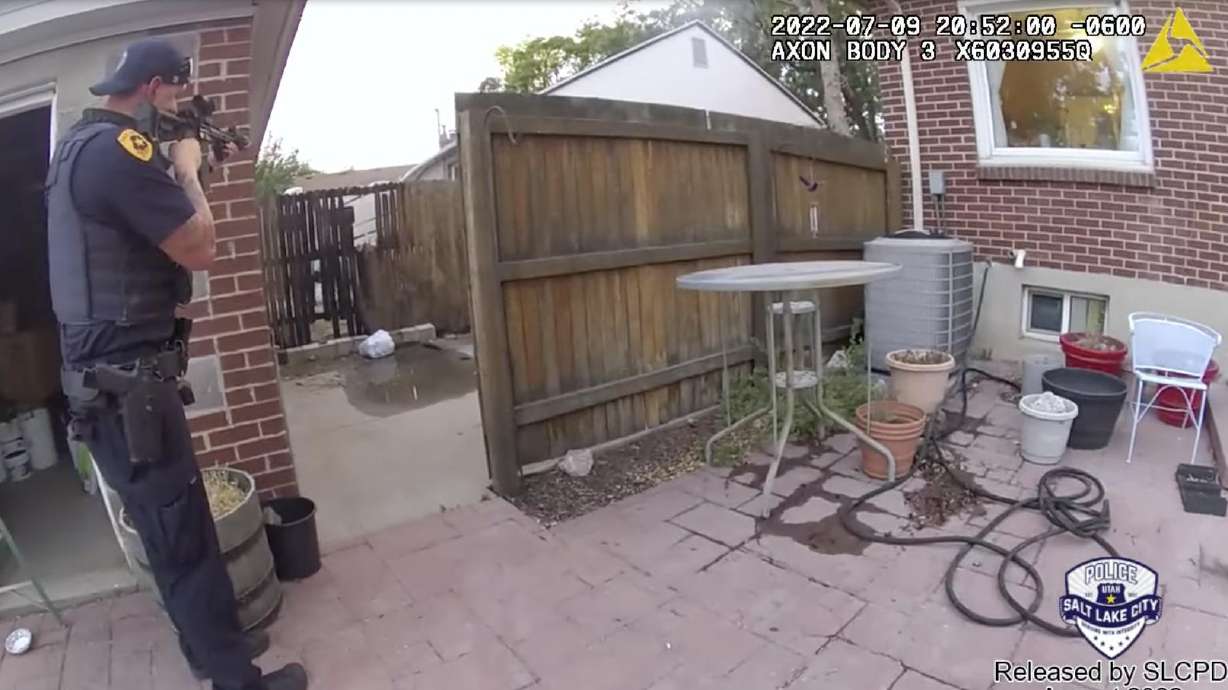 Body camera footage shows a Salt Lake police officer moments before shooting and injuring a man with a shotgun at 1421 S. Utahna Drive on July 9. Police were responding to a report that the man had set fire to the weeds in his yard. (Salt Lake Police)

On Wednesday, Salt Lake Police released body camera videos of multiple officers responding to the July 9 incident that culminated in an officer-involved shooting, including the two officers who fired their weapons.

On July 9, Salt Lake Fire Department was called to 1421 S. Utahna Drive following a report that Larsen had set fire to the weeds in his yard, according to charging documents.

“Larsen was extremely agitated and told firefighters he would not speak to anyone. About eight hours later, a neighbor of Larsen called 911 stating that a person, later identified as Larsen, had set fire to the side north of 1423 Utahna Drive and was dousing the fire with water to try to keep it from spreading,” the charges state.

Firefighters again responded to Larsen’s home and began putting out the fire. But soon after, they were confronted by Larsen who threatened to release his dog and shoot firefighters if they came to his property, according to the charges.

The firefighters then called the police.

As officers gathered at the residence, they set up a perimeter around the house and called Larsen on a patrol car intercom in an attempt to get him out and surrender.

Two officers positioned themselves in a neighbor’s yard. An officer with a rifle hid behind a brick garage or outbuilding, while a second with a handgun stood behind a wooden fence. The two officers kept an eye on Larsen’s backyard, peering over and through gaps in a wooden fence that surrounded his backyard.

“Let me see your hands! Drop the gun,” the officer orders.

Almost simultaneously, the two officers announce that Larsen has a weapon.

“He has a shotgun,” the second officer said.

It was unclear Thursday whether Larsen had fired any bullets. He ran home after the police shot him.

According to the charging documents, “Larsen pointed the shotgun in the direction of two police officers who then each fired their weapons, striking Larsen with both hands. Larsen dropped the shotgun and retreated into the house. After several minutes, Larsen surrendered to police and was taken into custody.”

According to Salt Lake Police, after the shooting, officers entered the home to look for Larsen, who did not resist. He was taken to a local hospital to be treated for his injuries and then imprisoned.

The shooting involving an officer was still under investigation Thursday. But Salt Lake City Police Chief Mike Brown said he was pleased with his officers’ actions that day.

“I am very proud of the way our officers responded to this situation. Based on a preliminary review of body-worn camera footage, our officers acted quickly to protect firefighters, neighbors and others. agents. They used time and distance to their advantage, but still found themselves in a situation that quickly escalated,” the chief said in a statement.

Most recent articles on the police and the courts

Pat Reavy is a longtime police and court reporter. He joined the KSL.com team in 2021 after many years reporting for the Deseret News