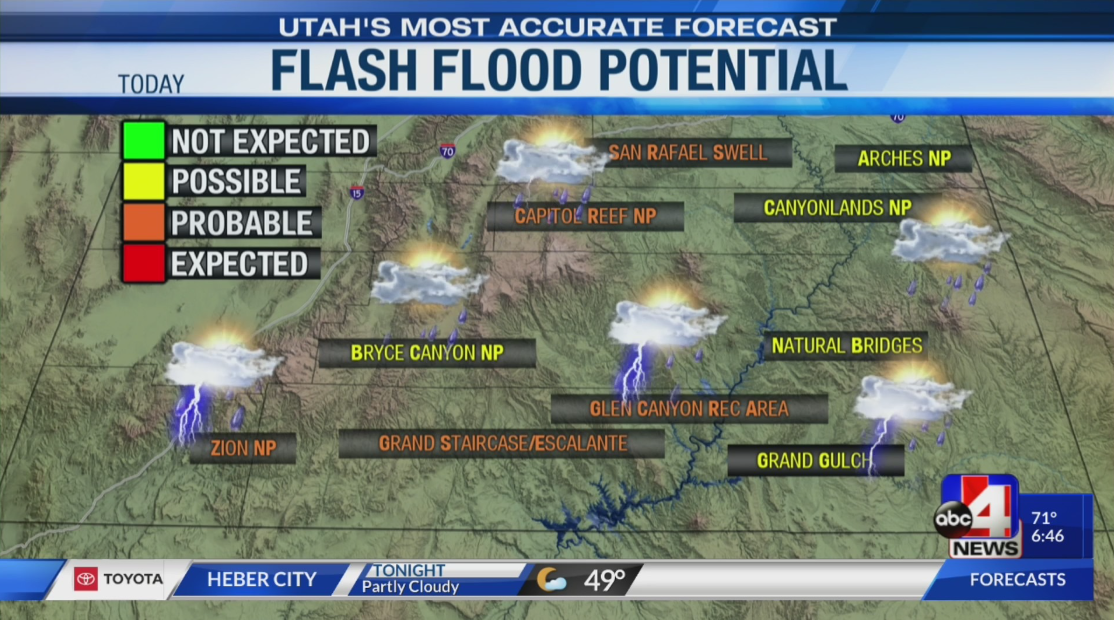 Weather in Utah could lead to flash flooding

Springdale, Utah, received 1.18 â€³ of rain in a short period of time, resulting in a mudslide and the closure of the national highway through Zion.

We also saw a decent amount of humidity near Brian Head, Escalante and in the carbon corridor with lots of thunder and lightning over Price. The southern moisture surge reached parts of the Wasatch Front with 0.12 â€³ of rain in South Salt Lake.

Today we have another day with the potential for stronger thunderstorms. Wednesday could be wet in places with storms forming and blooming in the afternoon, with our weak low pushing westward and still allowing moisture to drain further north and towards the Wasatch front.

Flash flood potential is ‘likely’ for all of our national parks today, so now is not the day to be caught in low lying areas as storms loom over our heads!

Northern Utah, eastern Nevada, and southern Idaho will experience highs near 90 degrees with partly to mostly cloudy skies. Daytime highs along the Wasatch Front will be in the upper 80s and 90s with SLC reaching our seasonal standard of 90. Below average temperatures expected with many 80s in Utah County, Castle Country, Basin. ‘Uinta, Millard County and Iron County.

St. George stays clear of triple-digit heat with a high of 94 and storms expected.

Important reminder with our flash flood potential, you never want to drive in running or standing water. Turn around, don’t drown! Very little water is needed to sweep cars and people, so stay safe!

As the storm sweeps through the state, you can stay informed with the accurate weather team both live and online at abc4.com/weather. We are There4You!