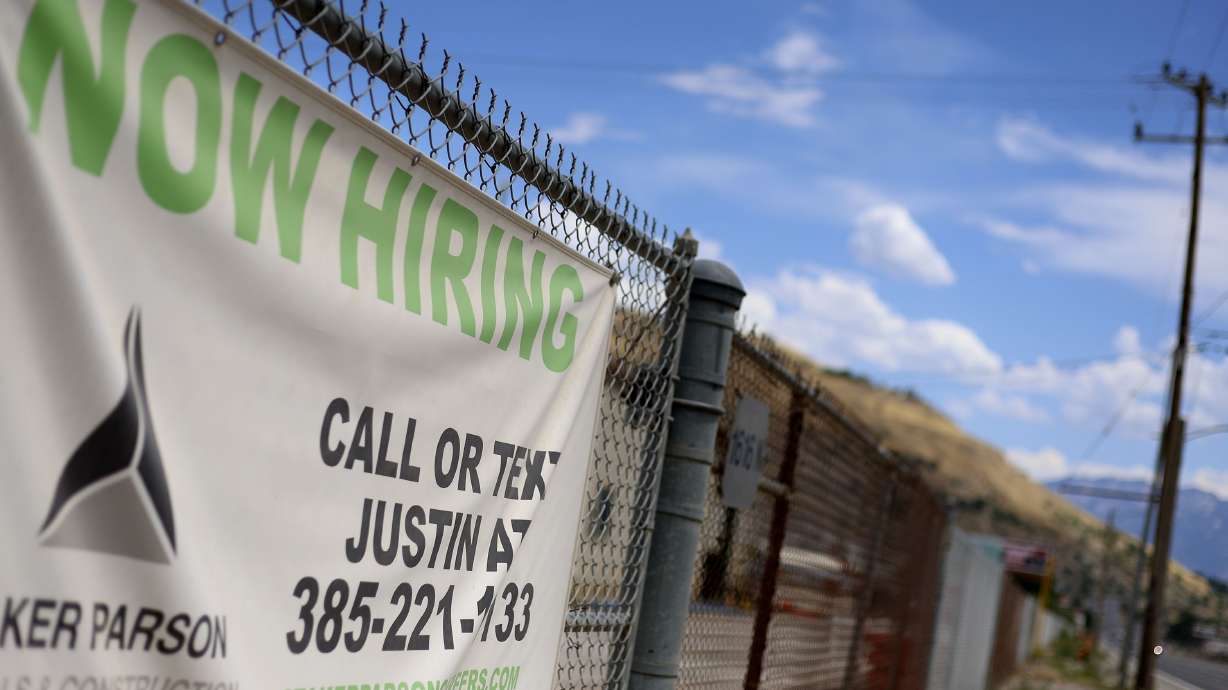 What is driving inflation and what is its impact on Utah’s economy and labor market?

A “Now Hiring” sign is pictured outside of Staker Parson in Salt Lake City on July 13. (Laura Seitz, Deseret News)

SALT LAKE CITY — Utah’s employment summary for the month of June further reinforces the idea that Beehive State’s economy is doing better than the national economy.

The state’s nonfarm payroll employment for June is up about 3.5% over the past 12 months, with the state’s economy adding 56,300 cumulative jobs since last June, bringing the current number of Utah jobs at 1,666,300, according to the Utah Department of Workforce Services, June 2022. Job Summary.

Additionally, the unemployment rate is “historically low,” at just 2%, well below the national average of 3.6%, according to the summary.

“History has shown that when the economy is operating at such a dynamic pace, it doesn’t stay there long. Something exogenous usually comes along to temper such a breakneck pace,” Knold said. “The economic omens of such a shift may be ahead of us.”

The main omen is economic inflation, he said.

“When prices rise noticeably in front of consumers’ eyes, it negatively impacts both their economic psychology and their enthusiasm,” Knold said.

Due to the negative influence of inflation, Knold pointed out that those who guide government actions with respect to the economy may tend to take an aggressive stance on inflation with the intention of bringing the economy down. inflation to a more passive economic position.

“The Federal Reserve Board of Governors, or the Fed, are the influential lords of the national economy,” Knold said.

When inflation is high as it is now, the Fed tends to raise interest rates in an effort to bring inflation down.

This process, however, can slow or hamper the US economy, Knold said.

“Everyone expects the Fed to act aggressively to raise interest rates in an effort to bring down this inflation, even if it means delaying the overall economic pulse of the United States in the short term,” he said. he declared.

What are the factors driving inflation?

So what is fueling inflation?

Knold said it comes down to several factors, some the Fed has influence over and some it doesn’t.

“Product supply chain disruptions have restricted the flow of goods from other countries, such as China, contributing to higher product prices and thus fueling inflation,” Knold said. “The Fed does not have the authority to reopen supply chains.”

He added that Russia’s invasion of Ukraine, which caused gas prices to skyrocket, is not something the Fed controls.

“Conversely, a national economy where workers’ wages are rising rapidly, producing rising prices that contribute to inflation is something within the Fed’s management sphere,” Knold said.

He noted that while the Fed doesn’t have the absolute power to change inflation, it does have the power to get consumers to change their spending habits.

“If you can’t increase the supply of goods, your other option for maintaining price stability is to reduce domestic demand for goods,” Knold said. “That’s what many expect from the Fed going forward and many are anticipating a US recession in 2023 because of it.”

If a recession does occur, Knold said the current health of Utah’s economy — which is at “the most favorable level possible” — will work in the state’s favor.

“There is plenty of room for an economic downturn before such a weakening reaches levels that become painful and damaging to the economy,” Knold said.

He also noted that Utah’s housing market could use some time to reinvigorate supply while demand pulls back a bit.

“The current hyper-stretched labor market may be of such a unique composition that what we normally expect from recessions – such as noticeable amounts of job losses and high unemployment – ​​may not be the results we will see if a recession was to come in the next year,” Knold said.

Knold said it “seems very likely” that a national recession will occur within the next year. What’s less clear, he said, is how this recession will affect both the economies of the United States and Utah.

This is partly because there has never been a time when the United States has faced so many workers leaving the labor force without an equal (let alone excessive) force aging.

“Future recessions may not have as many setbacks and disruptions in labor markets as they have in the past,” Knold said. “Setting new levels of recession expectations could be part of the economic stories of Utah and the United States in the future.”